Today, we think of Times Square when we think of the theatre district, but over 100 years ago, 14th Street centered around Union Square was full of theatre houses. The photo above shows what 136 East 14th Street looked like in 1908 when it was occupied by the Theatre Unique. It’s hard to believe that for 10 cents, a person could spend the day seeing several Vaudeville acts and 10 reels of the latest movies, according to Warren G. Harris at the Cinema Treasures website.

Can you guess what sits in this spot now? 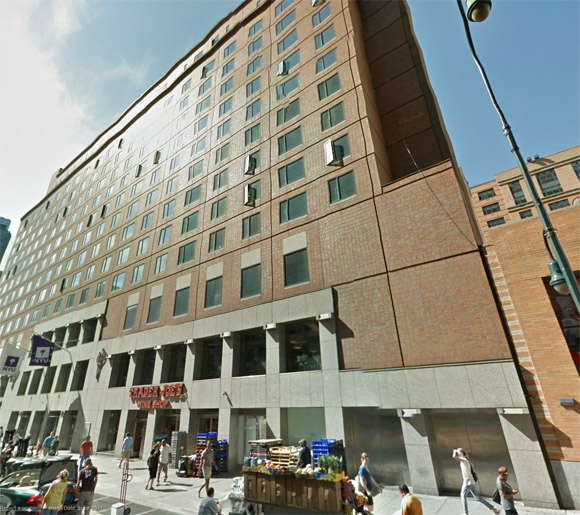 Although the Cinema Treasures page shows the P.C. Richards store as the current building that occupies 136 East 14th Street, it is actually this NYU dormitory constructed in 1998. Far from unique, the building covers a large portion of this stretch of 14th Street and represents the non-descript designs we’ve come to expect from NYU.

Taking a look back at what stood here 100 years ago, the Theatre Unique lived up to its name in design. Though not a huge structure, the large arched entrance gave the building an imposing air. When it opened as a penny arcade in 1907,

this stretch of 14th Street was no stranger to entertainment venues; since about 1870, New York’s elite came to this district to see the latest live performances. Leading up to World War I, however, legitimate theatre moved northward to 23rd Street, then 34th Street, and finally 42nd Street where it still remains.

The arrival of the movies gave new life to several theatres along 14th Street, and the Theatre Unique was one of the first in the city to offer movie screenings. The opulent movie house held about 800 seats, according to Cinema Treasures.

New ways of attracting patrons presented itself in the form of bright lights and illuminated signs. The 1908 book, “The Illuminating Engineer” includes a chapter entitled “Light and the Moving Picture Show” by H. Thurston Owens which goes into detail about the use of electricity to draw crowds. The photograph from that book (left), reveals an illuminated sign that reads “The World in Motion”.

In 1926, the Theatre Unique was demolished for the New Academy of Music, which had previously been located across 14th Street (where the landmarked Con Edison building now stands). That structure was designed by celebrated theatre architect Thomas Lamb and seated a much larger audience of 3,600. For a further look into the elaborate history of the New Academy of Music see the New York City Chapter of the American Guild of Organists webpage.