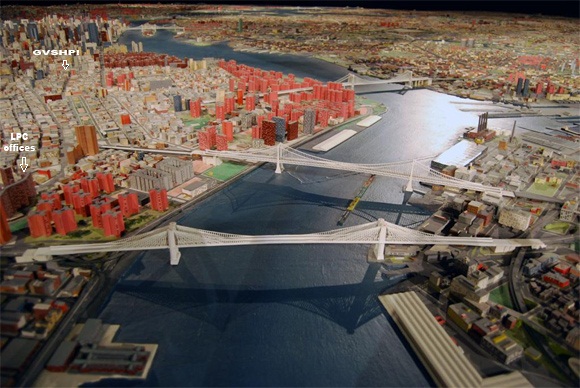 Do you recognize the three-dimensional map in this photo? Hint: half a century ago, the model-making team of Raymond Lester Associates was meticulously recreating the city’s five boroughs in preparation for a “universal and international” exposition that, next year, will be celebrating its 50th anniversary.

If you guessed that this is the Panorama of the City of New York created for the 1964 World’s Fair, then you are correct! The snapshot above captures the Brooklyn, Manhattan, and Williamsburg Bridges over the East River as well as portions of Manhattan, Brooklyn, Queens, and the Bronx (in the far off distance!). We’ve marked GVSHP’s location at the Neighborhood Preservation Center and the Landmarks Preservation Commission‘s offices at the Municipal Building across from City Hall.

Our friends over at Historic Districts Council have helped put together a special exhibit that will feature this beloved city treasure, which is housed in the Queens Museum of Art in Flushing Meadows Corona Park. Called “Marking Spaces: New York City’s Historic Districts on the Panorama of the City of New York” the exhibit will have its opening reception this Sunday, April 14th from 3-6pm at the museum. As the name implies, the city’s historic districts will be marked on the map in an ongoing celebration of 50 years of the New York City Landmarks Law, which was created in 1965 under Mayor Robert Wagner. 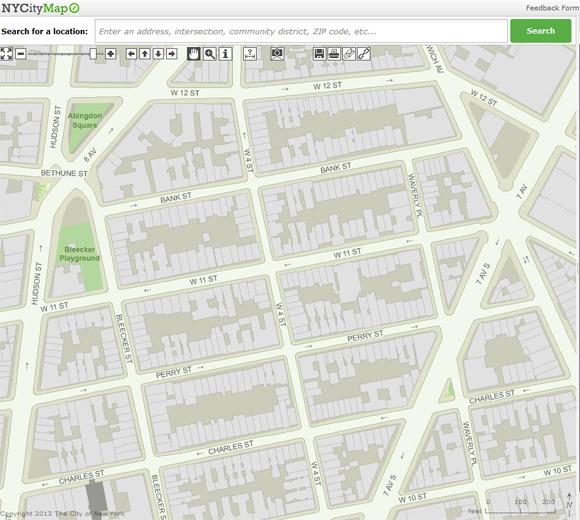 While we’re on the subject of maps, we wanted to feature a great resource that many people may not know about: CityMap. Available on the City of New York’s website, the map is a terrific way of seeing the footprints of buildings in your neighborhood. It’s linked to the City Planning Commission‘s GIS map.

The snapshot above perfectly illustrates the shared garden spaces in the middle of each block in this section of the Village, one of the reasons people love to call this neighborhood home. The character of each block ranges from rows of small-scale single-family houses to a mix of building types that include row houses, turn-of-the-century tenements, and 20th century apartment houses. 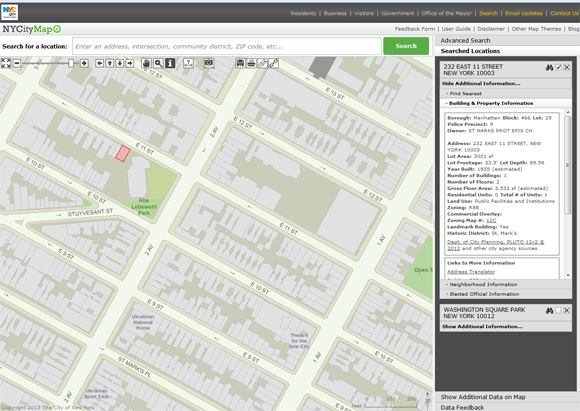 Typing in the address of the Neighborhood Preservation Center takes us to this section of the East Village. The map is handy in that it highlights the building you’re looking for in red, as can be seen with NPC above. The block east of NPC reveals a number of “dumbbell” tenements, so named because their footprint is shaped like a dumbbell. These are also known as Old Law tenements, which were built between the years of 1879 and 1901. Interested in learning more about the different types of tenements in our neighborhood? Look through this report written by architectural historian Andrew Dolkart and commissioned by GVSHP.

CityMap also gives you extensive publicly-available information about the property in the bar at the right side of the screen. The one thing to keep in mind is that the “Year Built” line is not always correct; the building that houses NPC was actually constructed in 1901 and not 1935. Similarly, many 19th century buildings will often have a default build date of “1900”, so it’s best to do further research to be sure! Check out our guide to researching buildings in the Village on our Resources page. 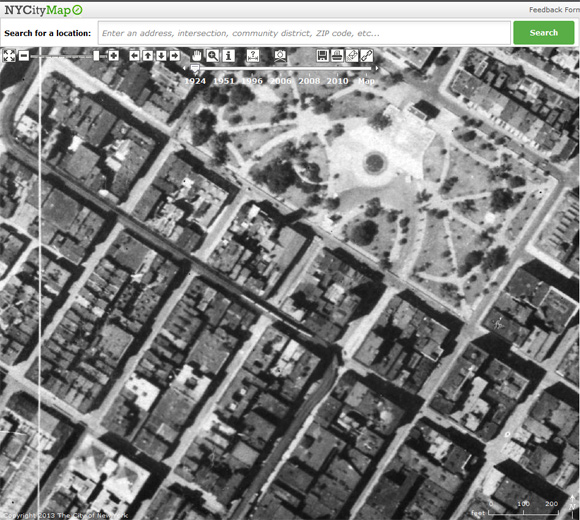 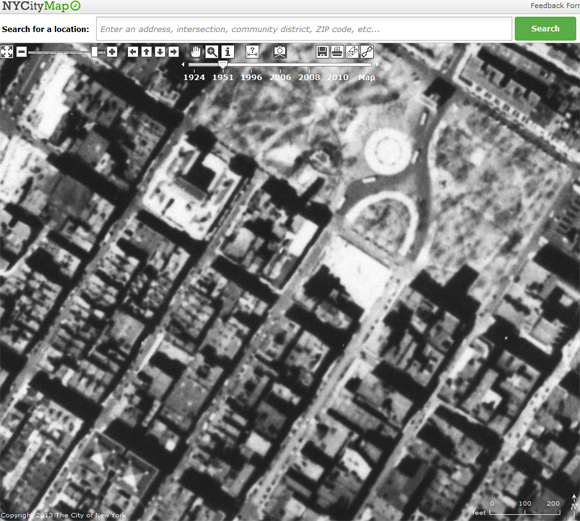 Another incredible feature is the ability to see how the neighborhood has changed over the years with historic aerials. The little camera icon at the top of the map gives you the option of seeing the city in the years 1924, 1951, 1996, 2006, 2008, and 2010.

Above is a window into Washington Square Park and the buildings to its south in 1924 and 1951. Besides the landscape of the park (including the street that once went through the park, visible in the 1951 snapshot and closed in 1958), the most noticeable thing is surely the numerous small-scale tenements and row houses that have since been replaced by large NYU buildings. 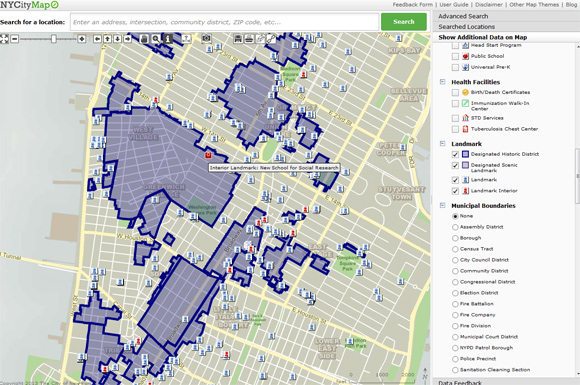 Lastly, you can also see the historic districts and landmarks in your neighborhood! Checkboxes on the right allow you to see all landmarked properties in the city; the arrow in the snapshot above points to the interior landmark at the New School for Social Research, where GVSHP has held programs in the past.

There are many more ways to use this wonderful resource. We hope you’ll take the time to explore it and learn more about your neighborhoods.