Building Broadway is a new series from Off the Grid that highlights the beautiful historic loft buildings that line Broadway between Houston and 14th Streets. These posts cover only bits and pieces of the histories of these buildings; learn how to become your very own building sleuth with our guide to researching the Village! 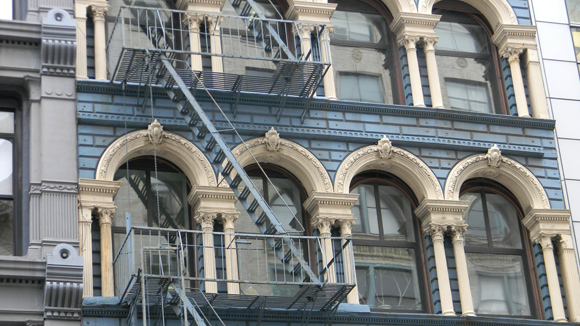 Kicking off the series is 620 Broadway near Houston Street, which also happens to be on the edge of the NoHo Historic District. Paired with the 1899 drawing appearing in Mail and Express (see below), a recent photo of the building shows that little has changed in the past 115 or so years. Sure, the signage has changed (we now have a better view of the cast iron between floors although the ground floor is obscured by a projecting UGG sign), but the architectural elements that make this building a fitting gateway to NoHo are largely intact. 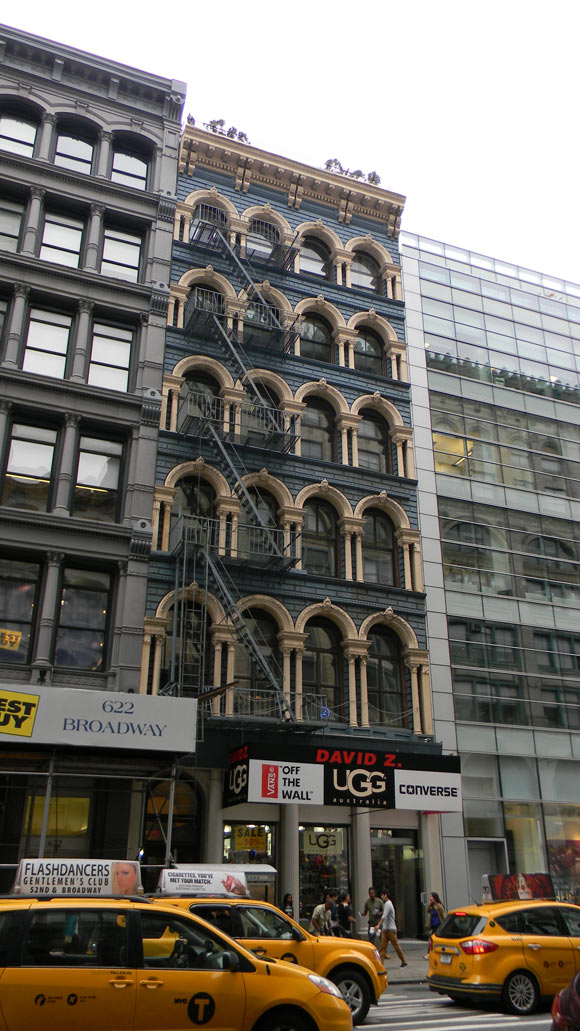 According to the NoHo Historic District Designation Report, the building was constructed in 1858-59 and was designed by notable architect John B. Snook. The cast iron was the work of Daniel D. Badger of D.D. Badger Company, which also manufactured the similar looking cast iron front of the Cary Building at 105 Chambers Street. That’s a building I’ve often walked by so that was a fun discovery! Cast iron was a pretty new technology at this time and the simulated effect of rusticated stone adds wonderful texture to the facade.

No. 620 was originally owned by Henry Dolan, millionaire landowner and philanthropist. It might be hard for us to imagine, but Broadway and the surrounding area had been residential in character until the 1850s saw the introduction of commercial buildings such as the store and loft building at no. 620.

In a nod to this area’s past, the building was converted to loft residences c. 1980 above the ground floor (there’s even a hint of a rooftop garden in the photo to the left with plants peeking out over the cornice).

It’s incredible to imagine, as you walk past the David Z. shoe store on the ground floor, that this building was practically brand new at the time of the Civil War. Just think of the generations of people no. 620 has witnessed! One of the many striking features of the facade is the paired colonettes that form the base of the arched window surrounds, a beautifully detailed confection capped by a bracketed cornice.

But what exactly occupied this building all those years before its residential conversion? Thanks to the 1899 illustration at left, we can see that umbrellas, parasols, and ladies’ hats played a role in the life of the building.

The Schloss Brothers Millinery & Supply Company, which appears to have occupied the ground floor at the turn of the 20th century, was noted in The American Hatter as pushing derby hat sales on their male customers. They shared the building with a few other clothing companies as well, including S. Goldin & Company who also specialized in hats.

Do you know more about this building’s history? And what do you think about the loss of the building to the right of it (a portion of which you can see in the illustrated photo)? See you next time on Building Broadway!

One response to “Building (620) Broadway: A Colonette Confection”