Recently, someone contacted us asking about the location of Stuyvesant Alley, which no longer exists. As it turns out, historic maps were able to help shine some light. This long-gone alley could once be found on the block between Second and Third Avenues, and East 11th and 12th Streets not too far away from GVSHP’s office in the historic Ernest Flagg Rectory of St. Mark’s Church.

By following Stuyvesant Alley through the historic maps available via the New York Public Library’s website, we’re hoping to introduce you to an invaluable research tool for learning more about our neighborhoods’ past. If you’re interested in seeing even more maps, we encourage you to visit the Map Room at the NYPL’s 42nd Street and Fifth Avenue location!

Stuyvesant Alley through the years… 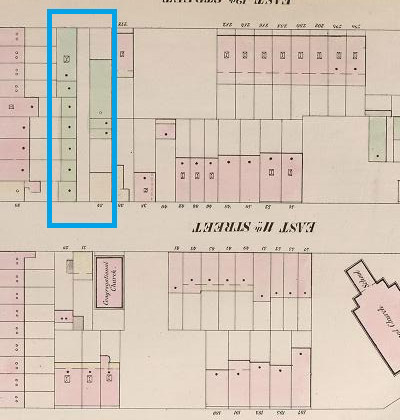 This 1853 map, published by Perris & Browne, is the earliest available map on the NYPL site that covers our neighborhood. The green indicates brick or stone stores lined the alley, as opposed to the dwellings in the surrounding area (noted in red).

You’ll see that the numbering system for each building is different than it is today. 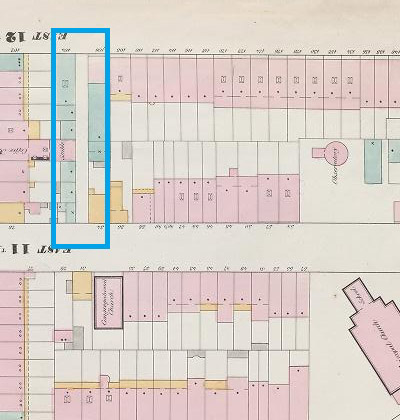 The 1857-63 Perris map shows the introduction of a brick stable at the back of a coffee mill that faces Third Avenue. A wood-framed building (in yellow) is visible in both of these early maps, though it’s a bit clearer in this one.

Did you notice the observatory that once sat on the north side of 11th Street, just across from St. Mark’s Church? 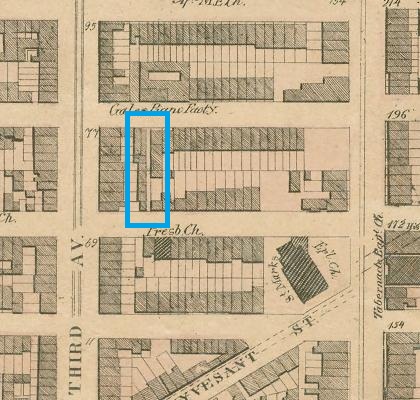 The 1867 Dripps map isn’t as detail-specific, but you still get a sense of what the area looked like in the period just after the Civil War. Just note that if you’re doing research and don’t see a building here that seems to exist on maps before and after this date it might be because this map isn’t as detailed as others.

If you were walking north on Stuyvesant Alley at this time you would have found yourself looking straight at Gales Piano Factory on the north side of 12th Street. 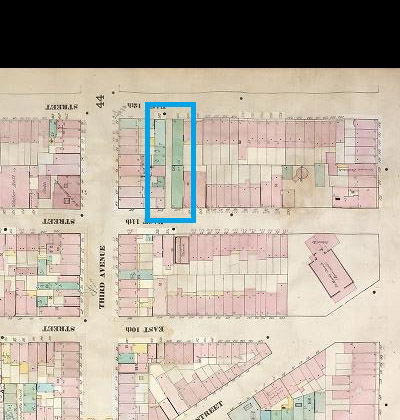 The good thing is if the Dripps map doesn’t give you the detail you’re looking for this 1868 Perris & Browne map should hopefully do the trick. Notice how the observatory across from St. Mark’s has returned on this more informative map?

The nature of Stuyvesant Alley continues to change with the addition of a large brick or stone commercial space. 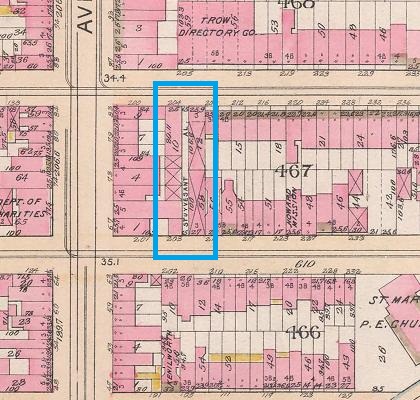 The next available map takes us to the end of the 19th century. This 1897 Bromley shows there were five stables along the alley (noted by the X on each building). Because this is a different map company, ways of showing these kinds of details may vary so it’s always a good idea to check the key at the beginning of each map.

It looks like our piano factory on 12th Street has become the Trow Directory Company. Also note that we’re starting to get floor heights on the buildings (5S = five stories plus ground floor store; 4B = four stories plus basement, etc.). 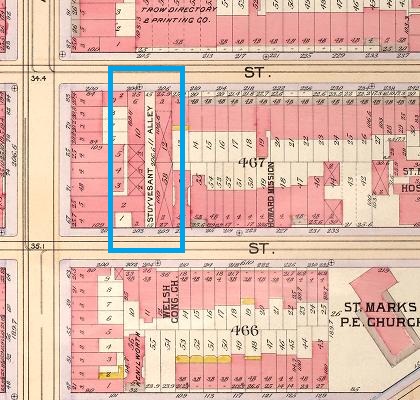 Just one to two years later is this 1898-99 Bromley map, which helps round out the 19th century for us. 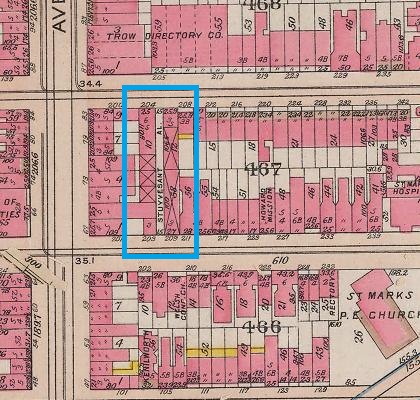 Here we are in 1911, published once again by Bromley. The stables remain, as does the Trow Directory Company.

Friends of the historic Ernest Flagg Rectory will see that it’s now on the map (see “rectory” written on the lot)! Built in 1900 for St. Mark’s Church, the rectory is still housed here. The Neighborhood Preservation Center also operates out of the building. You can learn more about the history of this great building in the St. Mark’s Historic District Designation Report. 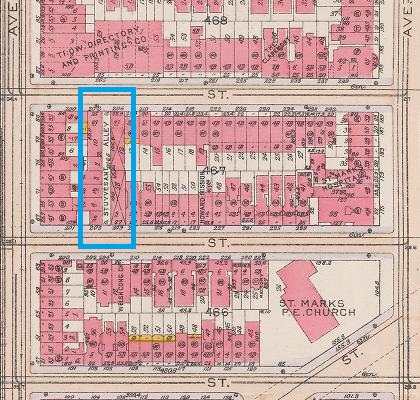 The last available map on the NYPL site is this 1916 Bromley map. It looks like the three stables on the west side of Stuyvesant Alley no longer functioned as such. The Trow Directory and Printing Company seems to have done well for itself, though, as is indicated by its expansion to three five-story buildings facing Third Avenue.

The alley appears to have been wiped from the map in the 1980s when NYU built their large dorm on the corner of Third Avenue and East 11th Street.

Be sure to take advantage of these great maps on the NYPL site the next time you’re trying to uncover the history of the buildings around you! See you next time on the Map It! series.

3 responses to “Map It! Finding the Lost Stuyvesant Alley”