GVSHP’s Annual Village Awards Ceremony is on Wednesday, June 6th at the New School Auditorium, 66 West 12 Street from 6:30 until 8 pm.  The Regina Kellerman Award is presented each year at the VA’s in honor of the GVSHP’s first executive director, who dedicated her inspiring career to the preservation of the architecture and built environment of the Village. Learn more about GVSHP’s Village Awards and RSVP online.

The Cooper Square Committee’s (CSC’s) mission is to work with area residents to contribute to the preservation and development of affordable, environmentally healthy housing and community/ cultural spaces, so the Cooper Square area remains racially, economically and culturally diverse.

“We approached the Ali Forney Center several years ago and proposed that we partner to develop this vacant city-owned building as housing for homeless LGBT youth, and they agreed,” said Steve Herrick, Executive Director of the Cooper Square Committee (care of the CSC’s Bea Arthur Residence Page).

The Ali Forney Center’s (AFC’s) mission is to protect LGBTQ youths from the harms of homelessness and empower them with the tools needed to live independently. AFC provides housing and a continuum of supportive services to help clients and residents thrive and prepare for independent living. Since AFC’s launch with just six beds in a church basement, the organization has grown to become the largest agency dedicated to LGBTQ homeless youths in the country. Their Bea Arthur fund continues to support the Bea Arthur Residence.

AFC and the CSC partnered to acquire and renovate 222 East 13th Street, now known as the Bea Arthur Residence in recognition of the famed actor’s $300,000 bequest. This space provides quality, safe housing for 18 homeless LGBT youth so that they can live free of stigma and make plans for their future. 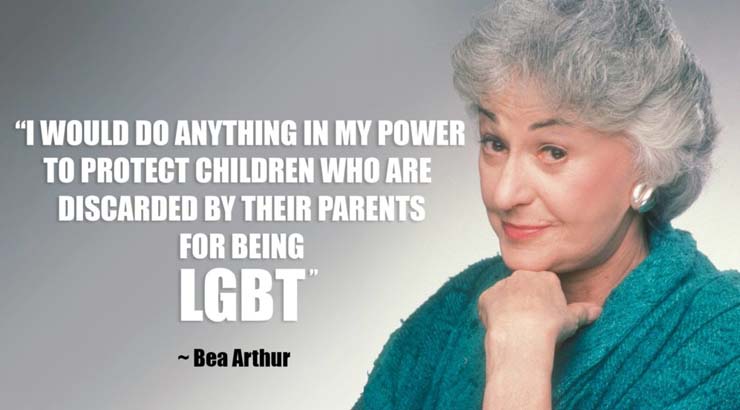 Although only 7% of the general youth population identifies as LGBTQ (lesbian, gay, bisexual, trans*, queer/questioning), approximately 40% of youth who are currently homeless identify as LGBTQ. This represents at least 200,000 homeless youth nationwide and approximately 2,000 in New York City alone. Individuals and organizations provide housing for these youth in rental buildings, which are expensive and not designed expressly for these youths’ needs.

As LGBTQ identities are more accessible and accepted, youths come out earlier. But many LGBTQ youth still face rejection by their parents and caretakers. Homelessness is all too common. This places these otherwise high-functioning young people at significant risk. Many seek safety and family within the LGBTQ community; the Bea Arthur Residence housing provides this support network.

The Bea Arthur Residence is the first congregate, transitional housing facility for homeless LGBTQ youth financed by HPD. Residents can stay for up to 2 years.

It will serve as a model for future residences with this unique and crucial mission.

222 East 13th Street and its Renovation

Built in 1851, this historic building was abandoned and decaying. AFC and CSC renovated the building. They breathed new life into it, providing this important service. Funding for the building included a $3.3 million grant from the New York City Council and the Borough President in 2013, and $40,000 from private sources. AFC and CSC acquired 222 East 13th Street from the City’s Department of Housing Preservation and Development on June 30, 2015. Renovation began on September 8th, 2015.

The architectural firm Magnusson Architecture designed the house’s three 3-bedroom units to house 18 residents, which was renovated by Builders-R-Us Construction Corp. They worked to preserve the character of the building and make its required external elevator as unobtrusive as possible. Significantly, the development is much smaller than zoning allows — a conscious choice to remain contextual and preserve the building and the feel of the neighborhood. They preserved and restored the façade, lintels, and cornice. They also installed a new fire escape.  Designer and furniture-maker Mitchell Gold donated all the furniture.

In addition to apartments, the building has a set space for counseling and a computer area. Architects created a rear addition for this 4 story building, increasing the space from 4,900 sq. ft. to over 6,000 sq. ft. Even with this addition, the backyard remains, as well as the space between this building and the neighbors for air circulation and to provide a garden space for the new residents. It feels as if it’s always been there, rather than feeling like a new development. This lovely red brick building blends seamlessly into East 13th street.

The Legacy of LGBTQ Housing Activism in the Village

This residence and the Ali Forney Center stand on the shoulders of LGBTQ gender nonconforming Village activists like Sylvia Rivera and Marsha P. Johnson. Johnson’s recent obituary in the New York Times remembers that in 1970:

“Johnson joined Rivera in founding Street Transvestite Action Revolutionaries, or STAR, to advocate for young transgender people — and, for a time, house, clothe and feed them from a tenement at 213 East Second Street. STAR grew out of the Gay Liberation Front, which advocated for sexual liberation and pushed to align gay rights with other social movements.”

Ali Forney was a homeless gender nonconforming youth, forced to live on the streets at the age of 13. Ali kept a close group of friends. He educated those he met about HIV prevention and safe sex. Ali helped others and agitated for justice. Carl Siciliano, AFC’s Founder and Executive Director, met Ali while working at a homeless youth drop-in center when Ali was 17.

Tragically, Ali was murdered five years later in December 1997.  No one has ever been charged with Ali’s murder. “His tragic death called attention to the atrocious conditions for homeless LGBT youth in New York,” writes the AFC.

Now, the Bea Arthur Residence has broad support and funding.  It houses and provides supportive services to residents with counseling, and support in their education. The goal is that every resident attains a high school diploma or a GED, then college or a job. AFC and the Center Youth Program at the LGBT Center launched Learning, Employment, Advancement and Placement (LEAP) program, open to residents.

The AFC writes: “Our goal is to not only provide food, water, and shelter. Our goal is to transform the lives of these young people so that they may reclaim their lives and never live on the streets again. Ali’s … spirit continues to live on in our work and in each of the lives we change.”

This residence is a first of its kind development in NYC, which is part of why it took so long to complete. NYC agencies had to rewrite or reconsider standard rules and practices. Snags in construction and permitting delayed the home’s opening date, but on November 30, 2017 the residence opened. The mayor officially declared November 30th Bea Arthur Day in New York City.

At the opening, Carl Siciliano, Executive Director of the Ali Forney Center said, “The Bea Arthur Residence marks an important shift in the way that we are able to house and care for young people who have been discarded by their families simply because of who they are. Pending city approvals, we hope to begin housing young people here within the next few weeks.” 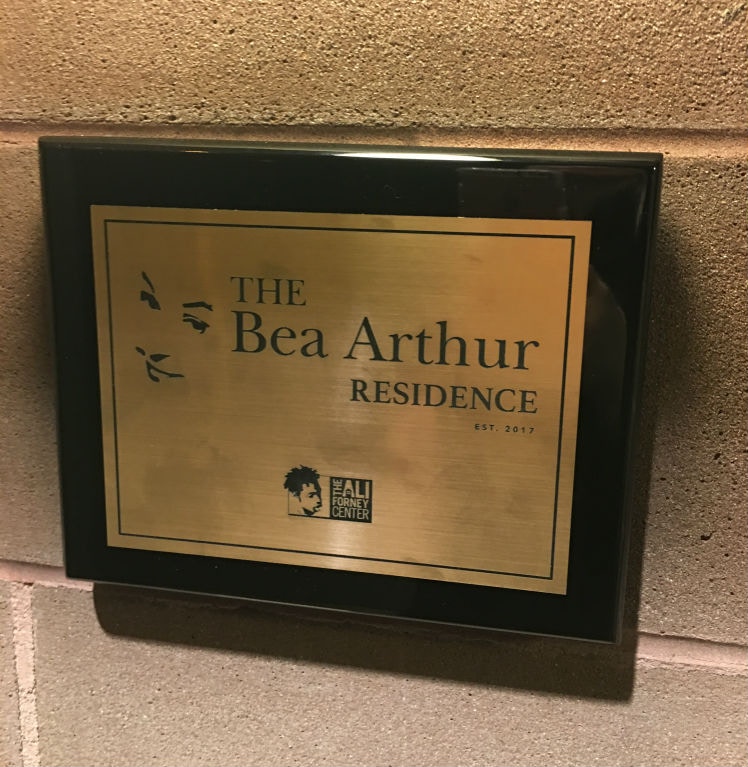