Unsure of what to get that special someone for the holidays? How about a horse? A hundred years ago you could have gone down to 126-128 East 13th Street and bid on one of the magnificent equines available via auction by Van Tassell & Kearny who occupied the building for more than fifty years. Built in 1903-04 and designed by architects Jardine, Kent & Jardine, this unique structure is one of the last remaining buildings in New York City that was erected for staging horse auctions.  Following a six year campaign by GVSHP, it was made a New York City Landmark on May 15, 2012, , and it is part of our celebration of the 50th anniversary of the City’s Landmarks Law.

A century ago, New York City, like other American cities, was crowded with horses.  It was estimated that at time there were about 75,000 horses here used mainly for transportation pulling private carriages, stage coaches and streetcars.  William Van Tassell & Edward Kearney were ‘auctioneers and commission merchants’ who formed their partnership in 1873 or 1874 and built offices and sales rooms on East 12th and 13th Streets.  Originally the firm operated as general auctioneers, but after 1904 “high class” show horses and ponies dominated the sales.  By this time Edward Kearney Senior had passed and his son, Edward W., had taken his father’s place.  It was Edward W. who commissioned this new, elegant building to attract the type of wealthy clientele their business warranted. 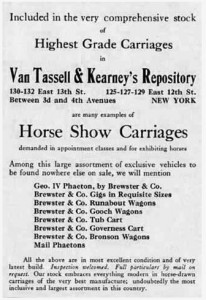 The building was planned as an auction mart to purchase expensive horses and carriages and clients included the Vanderbilts and the Belmonts.  Architects Jardine, Kent & Jardine were selected for the design who were responsible for other horse-related structures such as the American Horse Exchange (mostly demolished) and the 42nd Street Railroad stables (demolished).  The estimated cost of construction was $16,000 and the new structure replaced three row houses.  Measuring approximately 50 by 103 feet, it was faced with brick, limestone and featured a large center sales ring on the interior and a peaked roof behind the curved cornice with 1,350 square feet of skylights.  It was designed in the Beaux-Arts style and the facade is dominated by the large, central, arched window adding to the monumentality of this three-story structure.  Four bulls eye windows with brick voussoirs flank the centered entry and the facade is crowned by a projecting limestone element which originally supported a flagpole.

Unfortunately for Van Tassell & Kearney, horse auctions began to decline significantly around 1910.  This was due to the proliferation  of the automobile, particularly after 1908 when the Ford Model T was introduced, as well as the temporary ban on horse racing in New York State between 1910 and 1913.  By the 1920’s, the firm was mainly involved in automobile sales and the building would also be leased to a candy manufacturer.  Later the building housed the Delehanty Institute, a vocational school that trained women for the defense industry during the Second World War.  Part of the “We Can SAVE It – Landmark 128 East 13th Street” campaign included the use of the Rosie the Riveter image which was connected to the Delehanty Institute. From 1978 to 2005, 126-128 East 13th Street served as the studio of highly-influential 20th century artist Frank Stella.  Today, the building recalls the era when New York City was a leading auction center and horse sales were a common activity.

For more information on the history of Van Tassell & Kearney Auction Mart, click HERE for the New York City Landmarks Designation Report.  You can find out more about other individual landmarks and historic districts in our neighborhood on the GVSHP Resources webpage by clicking HERE.