While the neighboring West Village may have the more well-known sites, the East Village contains a rich assortment of places connected to LGBTQ history, including the homes of noted artists, writers, musicians, and activists. It also holds a vast array of performance venues and gathering spaces that attracted and helped launch the careers of many prominent LGBTQ performers and provided supportive social and political environments for LGBTQ people. The neighborhood was the scene of some of the earliest gay rights demonstrations, the birth of Wigstock and politically conscious drag performance art, and the home base of prominent figures like Allen Ginsberg, Miguel Pinero, Emma Goldman, and the Lesbian Avengers. We’ve just posted a new tour of East Village LGBTQ Sites on our East Village Building Blocks website — view the full tour here, or check out some selections from the tour below, which includes 30+ significant stories, figures, and spaces, as abundant and gritty as the East Village itself.

For more than forty years, from 1952 until his death in 1997,  Allen Ginsberg, one of the most prolific writers of the Beat Generation, lived and worked in the East Village. He lived almost everywhere – the list of his residences is long, and he bounced around a lot with different partners, spending time in bars, studios, clubs, and more. As a poet, Ginsberg was a major part of one of the most important literary movements in this country, but he was also known as a staunch advocate of free speech and an early proponent of sexual freedom and gay rights, who was quite open even in the repressive 1950s about his homosexuality. In his home at 174 East 2nd Street, Ginsberg finished his most famous poem, Kaddish. Outspoken and vivacious, Ginsberg and his poetry were committed to looking frankly at the realities of gay and underground life. Read more about Ginsburg in the East Village here. Read more about Ginsberg here.

Formerly the Fillmore East, this large theater space was an amazing place to dance! In the fall of 1980, the building was converted into what was to become the City’s best and most celebrated gay disco, The Saint, established by Bruce Mailman. The Saint, with a planetarium dome and impressive lighting effects, quickly became famous worldwide, and has been called “the most spectacular dance club New York had ever seen and the most expensive gay business venture ever attempted.” Its doors were officially closed on May 2, 1988 following a non-stop 48-hour party. The building was used periodically for a couple of years for various live events and then stood empty until the auditorium was demolished in 1995. Today, the narrow and highly decorative Adamesque facade of the building remains, its lobby remodeled into a bank, which features some photos of the Fillmore East, but no memories of The Saing.  Apartments called “Hudson East” occupy the space that used to be the auditorium.

82 East 4th Street offered clandestine entertainment since the cops raided a “dripping-wet” speakeasy called the Rainbow Inn in 1930. In 1953, club impresario Stephen Franse took over the bar and operated the biggest drag show in America. 35 drag performers made up the revue three times a night, while drag kings served as bouncers and servers. It is said that Frank Sinatra, Kirk Douglas, Elizabeth Taylor, and Judy Garland were patrons of the club. Later, in the 1970s, the bar was taken over and turned into Club 82, serving a new East Village community including Andy Warhol, David Bowie, and Lou Reed, who, it is said, met his lover Rachel there, a transgender woman who inspired a number of his songs about trans women and East Village nightlife generally. The New York Dolls, the Stilettos, and a pre-Blondie Debbie Harry all performed here.

The Bea Arthur Residence for homeless LGBT youth, named for “Golden Girl” Bea Arthur who funded the project, was born of a partnership between the Cooper Square Committee and the Ali Forney Center. This incredible community-building project and the beautiful historic building renovation of its exceptional 19th-century row house earned the Residence and its partner organizations Village Preservation’s 2018 Regina Kellerman Award. The Bea Arthur Residence is the first congregate transitional housing facility for homeless LGBTQ youth financed by New York’s HPD. This space provides quality, safe housing for 18 homeless LGBT youth so that they can live free of stigma and make plans for their future. The mission of the Cooper Square Committee (CSC) mission is to work with area residents to contribute to the preservation and development of affordable, environmentally healthy housing and community/ cultural spaces. The mission of the Ali Forney Center (AFC) mission is to protect LGBTQ youths from the harms of homelessness and empower them with the tools needed to live independently. With these two missions, the Bea Arthur Residence is a unique and important center for queer youth.

Political activist Emma Goldman lived in an apartment at 208 East 13th Street from 1903 to 1913. There she founded and headquartered her publication Mother Earth. Goldman was an outspoken advocate for anarchist causes, freedom of expression, women’s equality, birth control, sexual freedom, and labor rights. Her advocacy for free love put her at the forefront of a largely silent community well before the terms gay, lesbian, bisexual, or transgender were used. Magnus Hirschfeld, a German pioneer of sexuality and gender studies, called Goldman “the first and only woman, indeed the first and only American, to take up the defense of homosexual love before the general public.” Goldman’s romantic life is well documented, as wild and public as her political life, which saw her imprisoned and eventually deported.

Ana Marie Simo was born in Cuba and worked as a journalist in Havana before moving to Paris and eventually settling in New York in the 1970s. Since that time, she’s made a name for herself as an artist, an activist, and a consummate East Villager. Simo’s artwork includes plays, performances, and more, and explores themes of Latin culture, sexuality, and gender. Simultaneously, Simo has worked to create vital creative and political spaces in her community; in 1976, she co-founded Medusa’s Revenge, the first lesbian theater in New York City. In 1992, she co-founded the Lesbian Avengers, a direct action group dedicated to issues of lesbian survival and visibility. Right here in the East Village, in Simo’s East 1st Street apartment, she and longtime lesbian activists Maxine Wolfe, Anne-Christine d’Adesky, Sarah Schulman, Marie Honan, and Anne Maguire created the Lesbain Avengers – a community that became international, acting for lesbian feminist rights and recognition. 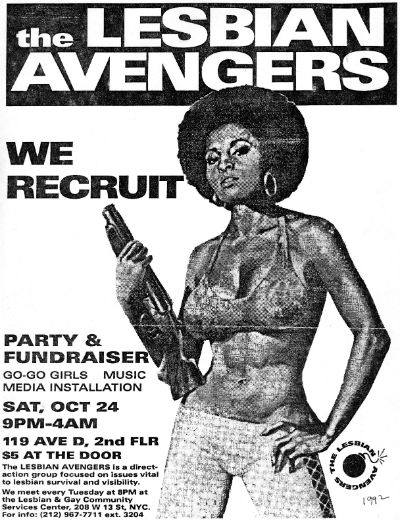 Simo and her comrades also began New York’s Dyke March. Simo also founded, along with Kelly Cogswell, The Gully – an online magazine published in English and Spanish that offers “queer views on everything from the Iraq war and human rights in Guatemala to same-sex marriage and World Cup soccer.”

Want to explore more East Village LGBTQ history? Check out the full tour here, which also includes one of the first ever gay rights demonstrations, the club, and park which gave birth to a drag festival phenomenon, a groundbreaking downtown cultural institution co-founded by a noted gay Latinx poet, and the theater which nurtured a generation of LGBTQ playwrights.